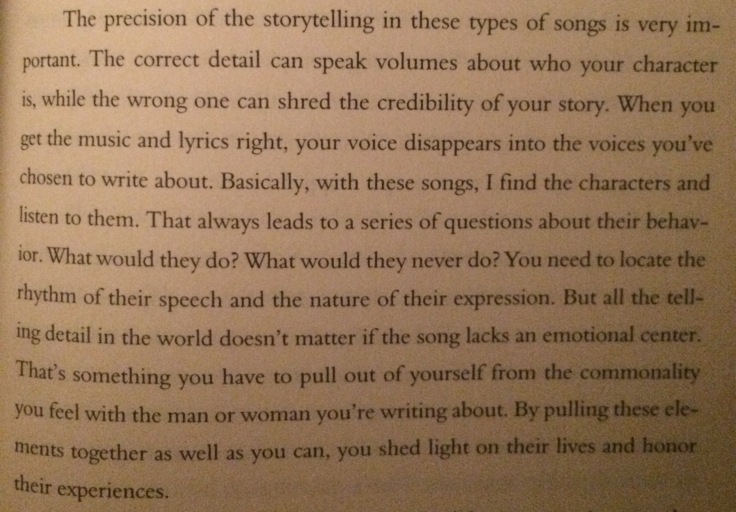 You know that feeling when you’re nearing the end of a book, and you start to read less and less of it because you don’t want it to be over yet? That’s where I am with Bruce Springsteen’s “Born to Run.” It’s 500+ pages of honest reflections, poignant insights and touching memories from one of the most legendary rock heroes, and the tale of his rise to his vaunted status as told by the man himself does not disappoint.

There’s a lot to learn about Springsteen’s life and upbringing here. How his childhood affected his life, for better or for worse, is a reoccurring theme throughout each of the brief, segmented chapters. He is humble, even when admitting the size of his own ego, which I think is a respectable thing to admit and speaks volumes to the self-awareness he has cultivated — often a difficult, but necessary, thing for creative people to do. He talks about his struggles with depression in an honest and forthcoming way, as a memoir demands, but he doesn’t ever seem to wade into “poor me” status; rather, his struggles are just one part of the journey. But some of the passages that really excite me are the ones that reflect on songwriting.

Springsteen songs are iconic, in a way that’s hard to untangle the man from the work. Reading “Born to Run” makes clear how much heart and soul, feeling and thought was poured into these songs, and not just the hits. Every album came from a specific story or theme Springsteen wanted to portray, partly stemming from reactions to his own life circumstances as much as the world around him. His thoughts about attention to detail, as quoted in the above photograph, speak to this in a very honest way. Good songwriting, as I have said, is good writing, and good writing translates across mediums. Strong characters. Small details. An economy of language. This is all bedrock. You think about the songs that have been loved for so many decades by fans of all generations, and there’s a timelessness to them. No retreat, baby, no surrender. When I read about what it took for Springsteen to create these songs, it’s inspiring to know how hard he worked, and also how much he cared about what he making. One can’t cross the finish line without a real drive to do so.

I told myself I wasn’t going to go on a Springsteen catalog binge until after I finished the book, but yesterday I couldn’t help myself. I snuck a few listens of “Chapter and Verse,” just to satisfy my palette, and kept coming back to “The Rising,” a song I associate with post-9/11 America, the feelings of that tragic time and the attempt to come together as a nation. Its messages still ring true today — especially today, in fact — and it is proof the themes an artist touches on at one point in their career may come back again and again, giving that song new life and new associations. This endurance is a key ingredient in songwriting that is as celebrated and beloved as Springsteen’s work, it’s something any of the greats have. But so much music is put out into the world that just a few people might hear, or ever remember, is that work worth less than songs that are globally famous, cemented into history and have brought so much emotion and feeling to the fore? It’s easy to say “yes,” but I can’t say for certain; it all tells a story, it all connects back to someone’s idea. But it makes me think about how rare great work really is, and how dedicated one must be to achieve it, an objective that unifies musicians and creators of all kinds. Everyone is just trying to tell a story, to connect, to be remembered.