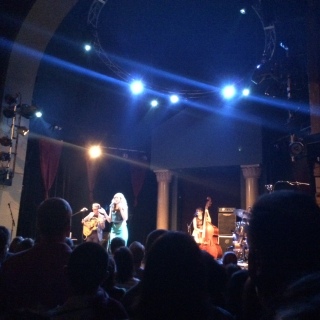 Last night I had the awesome pleasure of watching Lake Street Drive perform their radiant live show – if I had to bet on any band about to pop off in the mainstream/top 40/award-show category, it’s them.

I started listening to them in the spring and loved the retro vibe – which is what instantly draws in the listener, until the grooves and vocals  keep you sticking around. There’s clear Motown inspiration in the harmonies, swing beats, and vocal adornments, not to mention lovesick blues aplenty. But – and I think this is why their shows sell out worldwide – there’s something so fresh and modern about them. Perhaps that’s because of the members themselves. They show clear joy in what they do, the gender balance is refreshing in a four-piece, and their style is ultimately trendy.

Singer Rachel Price is the bandleader and it’s a role she was born to play. The show opened with her sultry vocals a capella, joined by the three members clustered around the microphone. Very 40s, just like her fabulous curled blowout. I was in love with her. So was the rest of the crowd.

Price’s showmanship and dance moves are top-notch, and she manages to walk that fine line between performer-as-diva and performer-as-entertainer, commanding attention but never crawling for it. Just effusive, blissful energy – and her between-song chatter was solid-but-subtle real-talk about weekend partying and sexual frustration. It is clear she adores her bandmates as much as they adore their instruments.

The guitarist doubles as the trumpet player, and stand-up bass player Bridge Kearney is a master at taking the classical instrument to rock show levels, soloing and segueing from the band’s originals into, of all songs, Van Halen’s “Jump.”  The drummer was positioned side-stage and lit from above, so you could see his motions clearly and it added energy.My favorite track was the ballad, of course, called “Just Ask,” but I loved the closer and soon-to-be-single “Hell Yeah.”

Seeing this show was not on my to-do list when I woke yesterday, but I couldn’t have been happier to attend. Singing a little, dancing a little, and laughing a little to Lake Street Drive was an unexpected surprise, like so many other wonderful moments in this life.

“If you draw the line baby,
I will walk the walk
But I may sow some seeds baby
And I may pick a lock
My door is always open
If you find you wanna talk
And when you’re good and ready
We can go as deep as you want