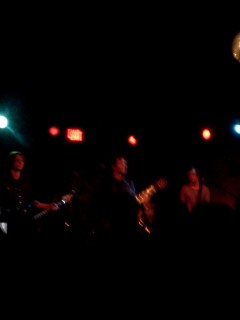 Just a post to commemorate the Lovedrug concert I went to Wednesday, April 11, 2012 at the Bug Jar with my dear sister. Spent a good hour before the show chatting with the band, sharing stories about travel and music and bands and life and partying. Lent out a cigarette or two. Entirely likable gentlemen, not taking themselves too seriously but not spotlight-seeking.
All in all, enjoyable company. Hope I was too, though my sister told me I talked too much. I was drinking Jack and diets, so, my animation increased tenfold as dark liquor tends to do to me. Layer on talking about compression, and Taylor v. Martin, shady American suburbs and favorite musicians, and yeah, I’m in a pretty good mood.

I am past the point of being intimated by meeting musicians I look up to. At one point, sure, but the mystery of the traveling musician is just that, a mystery, and it’s a complete fallacy when you get down to it. There is no magic potion, these are men and women with a lifestyle choice that has a number of conseqeuences most people don’t want to take, or give up on. And it creates drama, intrigue, romanticism. Talent will do that to a soul. Hence the allure.

But, I digress. The show itself – a 50 minute rip through nine or 10 tracks old and new. Incredible. Pretty much everything sounded perfect, no technical difficulties, no notciable alterations to songs to make them easier. No kitchy audience banter, no smug prefacing. Just the tight live performance of modern American grunge-inspired and melody-laced rock and roll. 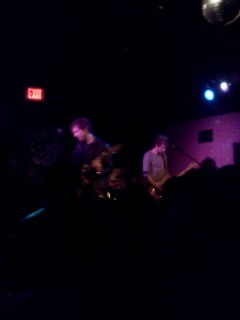 The Bug Jar is tiny – they may as well have been performing in my parent’s basement, and I think if I asked them, they would – so keys and auxiliary sounds on albums were not replicated live. The setlist reflected this – no “We Were Owls” otherworldly intro, no piano-driven “Everything Starts Where it Ends” cuts. But that was OK, this was about silky guitars, eat-your-heart-out melodies and a really-fucking-tight rhythm section.

I was awestruck the whole time, really, too enraptured to notice the world around me. Any thought that dared enter my head unrelated to the performance in front of me quickly burned out, unable to compete. Before the show I wondered if they may have intentionally held back a bit, as they were playing in NYC the following night and clearly that’s the crowd you want to impress coming off a new album, right? – but this concern was not validated. They played tight, they played well, the entetained the living daylights out of a small but devoted crowd, true troubadors to the end.

It can’t be easy, weeks on end on the road, but what a challenge, when home is a memory, and friends and loved ones are scattered around the country. A meaningful moment is hardly replicated elsewhere, just replaced by a new one til it all blends together into one mess of snapshot recollections – meanwhile, your energy pours out on stage night after night, thretening to leave you stale if you push it that much harder. Human is human, right? Even at those times when we feel so much more – like when songs still your heart and mind, or when the blood in your fingertips delivers the pulse in your soul, or when the tiny fraction of a second between the last moment and the next one captures more meaning than you’d ever care to begin to unravel. 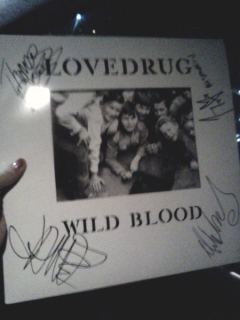 Oh yeah, that concert. Damn. “Wild Blood,” “Dinosaur,” “Pink Champagne,” and “Great Divide” all made appearances, as did “Angels With Enemies,” and “Blackout” which I was very excited to hear. “Blackout” in particular sounded amazing, fierce and imposing and frightening til the last foreboding lyric – “walk down the hall/and put yourself to bed.” They closed with “Anodyne” and I was thrilled to hear it. Gorgeous, chilling song (see below for video worthy of equal adjectives, cut from cult b-list horror flick). The crowd, throughout the night, was incredibly responsive – Lovedrug fans are a devoted breed.

After the show I got my “Wild Blood” vinyl signed, without a shred of fangirl shame. I have so much respect for this band and every time I see that record I’m going to remember to never give up, always stay true to yourself, and don’t be scared to show the truth – it’s the only thing that counts.

I just fucking love this band.